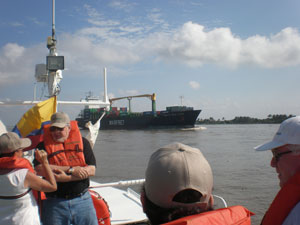 As United States Ambassador to the Commonwealth of the Bahamas, Ned L. Siegel took part in the Alternative Energy Conference along with the Organization of the American States (OAS) and the Bahamian government efforts in bringing business people, government officials and donors from throughout the Caribbean basin to focus on providing alternative energy solutions for island nations. Infrastructure projects such as the aforementioned Alternative Energy Conference in the Bahamas have provided The Siegel Group with extensive experience in formulating projects that not only develop the economy of nations, but also focus on greener technologies.

Current infrastructure projects in which Ambassador Siegel and The Siegel Group are playing significant roles include:
GreenWell Energy and Infrastructure Corp. (GWEI)

Coinciding with the passing of the US – Colombia Free Trade Agreement, GreenWell Energy and Infrastructure Corp. and SOCIEDAD PORTUARIA BOCAS DE CENIZA S.A. (SPBC) of Colombia, have entered a Merger and Acquisition agreement wherein SPBC will be acquired by GWEI to focus specifically on developing the Deep Water Port in Barranquilla, Colombia.

Green Well Energy & Infrastructure (GWEI) through its wholly owned Colombian subsidiary SOCIEDAD PORTUARIA BOCAS DE CENIZA S.A. (SPBC), is constructing a new port facility at the mouth of the Magdalena River, in the area known historically as the Bocas de Ceniza, near the existing Port of Barranquilla.

The principal function of the proposed port will be the transshipment of coal from river barges to Capesize bulk carriers, loaded at the first all-weather, deep-water berth in the Barranquilla area. The Port will also be master planned to allow growth into other cargo operations, including containers, break-bulk, and liquid bulk; with associated industrial developments. Because of the deep-water berth, the future expansion into other commodities, and the relatively high throughput capacity when compared with other terminals on the Magdalena River, the project is referred to as the Barranquilla Superpuerto.

Alternative Fuels Americas (AFAI-PK)
The AFAI Mission:   Alternative Fuels Americas will maintain and grow a profit driven Latin American based Green Oil Company establishing above ground oil fields through the incorporation of wild feedstock, the cultivation of multifeedstock agricultural plantations and the establishment of proprietary algae farms, and the operation of crude oil extraction and transesterification facilities to produce and sell internationally accepted high-grade biofuels into respective  domestic markets.  Alternative Fuels Americas, Inc. (AFAI) has been quietly constructing a viable and sustainable biofuels company in Latin America since 2005.  Making certain to stay away from the hype and promoters fueling “biofuels-mania”, the Company has preferred to engage in plant trials, research & development and biofuels  strategy development.  Today, we are among the few companies with both the vision and the knowledge for execution.

FIPILMDC, LLC
Stateside, The Siegel Group has recently formed and is Managing Member of FIPILMDC, LLC, which is in the process of acquiring approximately 3,100 acres of land in St. Lucie County, FL, for the development of an inland port and intermodal logistics center with interchange hub for rail/truck/container storage and 12.9M+ sf of distribution center, warehouse, manufacturing and related facilities.

The 2014 expansion of the Panama Canal will alter trade patterns with Asia which now heavily favor west coast ports and the continued economic growth in Latin America is also creating increased trade opportunities within the State of Florida.

Both private and public sector market research strongly supports the need for a major integrated logistics center in the south-central region of the State.  Their research concludes that there will be a substantial increase in imports and exports through Florida’s landlocked seaports (principally, Miami, Port Everglades, Palm Beach and Jacksonville) forcing them to expand activities to inland locations.  The referenced property is uniquely located with excellent connectivity to the Florida Strategic Intermodal System with local connections to seven (7) interchanges on I-95 and four (4) interchanges on the Florida Turnpike.  Existing rail via Florida East Coast Railway’s KLine provides the vital link of FIPILMDC, LLC’s site to the aforesaid ports.